Over the past 50 years, there has been a lot of progress on disability rights, but there is still a long way to go. My hope is that this trajectory will continue, and there will be more and better opportunities for—and greater inclusion of—people with disabilities in the years ahead. 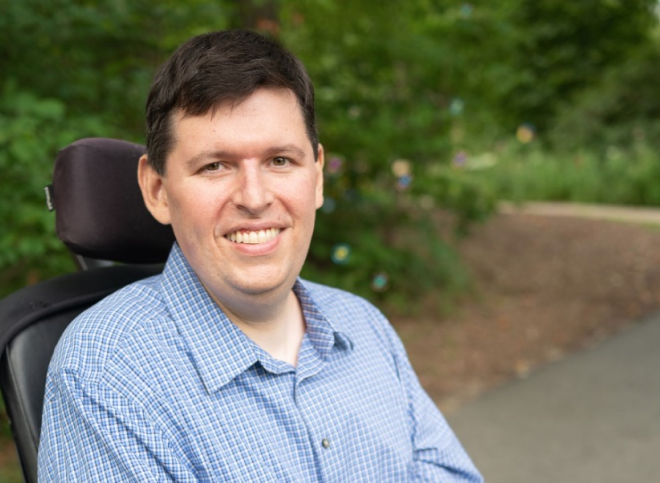 As a new dad, Mario loves his three girls. He takes time out of his busy day to play with Petra, his oldest, who loves to ride on his power wheelchair around the neighborhood, and to take care of his newborn twins: Ginny and Evie. He and his wife, Theresa, both work from home these days, which suits them well as it allows them important time with their children around their busy schedules.

Mario is a career disability rights lawyer, who is currently working for the US Access Board, helping to enforce the Architectural Barriers Act of 1968. The law requires federal buildings be held to certain accessibility standards. He also serves a long list of advisory roles with local and national advocacy groups and government entities.

Mario’s family and career have arisen from what were once troubling doubts about his health and therefore future. As a boy, he was misdiagnosed with Duchenne muscular dystrophy (DMD), but over time was found to have Becker muscular dystrophy (BMD). Refusing to acquiesce in the face of an incurable illness, Mario has instead built a robust life at the intersection of his disability and his success as a lawyer, husband, and advocate. He continues to fight for a more accepting and accommodating world for people with disabilities while reveling in the subtle joys of life at home with his family. 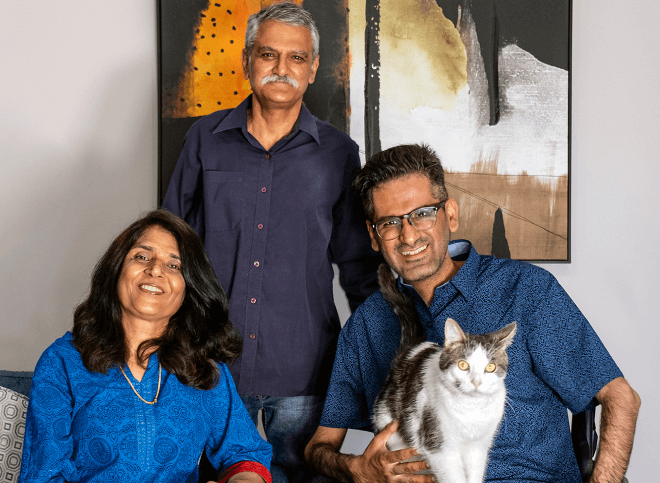 For now, I’m trying to fulfill my passion for traveling. I want to make the best of what is available out there. That is my goal.

Pratik’s vistas have changed dramatically over the course of his life. Originally from Northern India, near the Himalayas, he grew up dreaming of traversing the mountains and valleys of the world. These dreams were thrown into question when he was diagnosed with Becker muscular dystrophy (BMD), which forced him to navigate his adolescent years at an unknown rate of physical decline.

As a teenager, Pratik began using a wheelchair and transitioned to using it full-time when he began his studies at the National University of Technology in Hamirpur. There, he fought against limitations placed on him by India’s limited accessibility infrastructure. His friends literally had to carry him up flights of stairs to get him to class on time. After graduating, it became clear that Pratik would need to consider relocating to a more accessible country in order to live as an independent adult. He and his family emigrated to Canada after he finished college, and for the past several years has called the city of London, Ontario home, where he works as a software engineer.

While BMD has few available treatments and no cure, it has not stopped Pratik from pursuing a fulfilling life as a young professional with an unquenchable thirst for travel. Always with his eyes on the horizon, Pratik navigates the changes in his world with ingenuity and a devotion to achieving his goals.

He goes through so much. I admire him. He always stays positive. 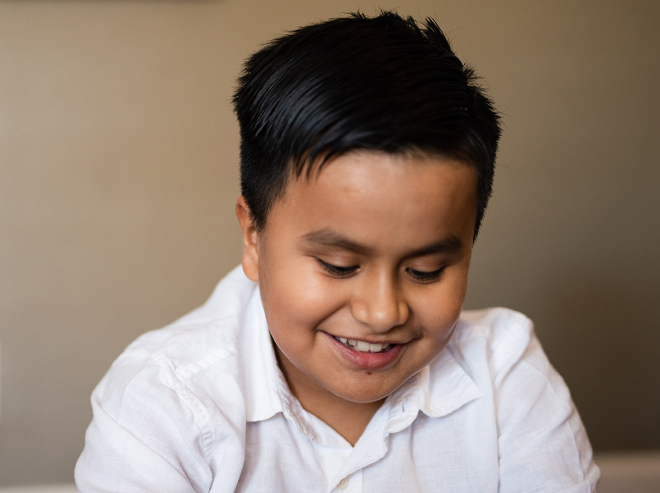 Gibran loves spending time at his office. Though that might sound unusual for a 10-year-old boy, he truly enjoys passing the hours at his desk, in a makeshift cubicle in a corner of his family’s living room. From this modest vantage point, sitting in a large pilot’s chair, he plays, interacts, learns, and fulfills his desire to explore the expanses of the world through his computer. His aspirations are not small: Gibran wants to be an executive chef and the President of the United States. His quirkiness, curiosities, and dreams fill his family’s home with hope as they collectively grapple with the fact that Gibran’s life hangs in the balance. He was diagnosed at six years old with Duchenne muscular dystrophy (DMD), and now faces a series of challenging transitions as his body grows and the disease progresses. For Lorena, his mother, the challenges of the diagnosis were amplified by a language barrier. For years, Alexa, Gibran’s older sister, who is bilingual, would translate complicated medical terms from English into Spanish for her mother. Meanwhile, Lorena implored patient organizations in the US to provide more materials in Spanish. After learning much in a short time, Lorena understands the importance of supportive therapies, mobility devices, and having an accessible home—but these all come at a financial cost that is difficult to bear as a single mother. Nonetheless, Lorena’s dedication to her son and the support she’s received from the community of other DMD-moms, remains the most valuable commodity around. 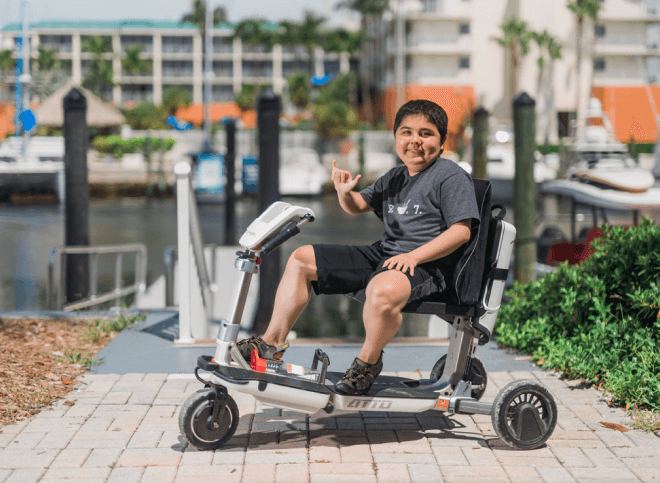 I don’t want to be like this for my whole life. I want to experience what other people normally get a chance to do.

Lucas is carrying on his parents’ healthy appetite for an adrenaline rush. Whether he’s scuba diving in the Florida Keys, paragliding off the top of a mountain, adaptive skiing, or riding in a motorcycle sidecar, Lucas is helping keep the adventure alive. As a young man, he has already traveled the world extensively. Karla and Dave, his parents, are on a quest to maximize Lucas’ forays in the world while he still can. Their only son lives with Duchenne muscular dystrophy (DMD), and he was first diagnosed at the age of four. Garnering a “can-do” attitude, his parents strive to get Lucas the best treatments while also getting the chance to experience the wonders of life with the proper accommodations. Losing the ability to walk is a recent and major recent milestone in Lucas’ journey with DMD, and regaining that ability is currently his top priority when it comes to the potential impact of new therapies. He now uses a scooter full-time, and asks for assistance more. However, when he’s playing with his friends, he barely notices that he’s any different. “Since I know a lot of people, it’s less of an issue,” he says. "People know I need help.” Receiving that assistance enables Lucas to do incredible things and keep his body and mind astute.

At first, I thought nothing was going to change—we’ll just do things differently—but that was not the case. 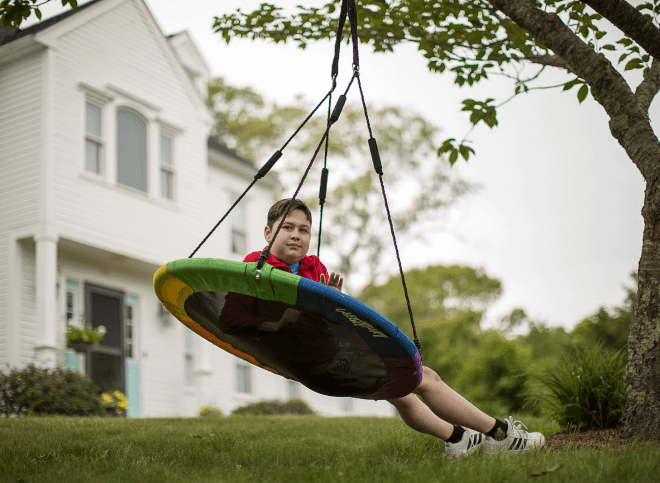 Through the wonders of modern technology—a video-game headset and controller—Noah and his best friend remain in contact on a daily basis despite the pandemic. The buds have been separated not only by social distancing, but because Noah and his family recently made a move to a larger, more accessible house in a new town on the south shore of Massachusetts.

The new house, with all its mobility features, was necessitated by the progression of limb-girdle muscular dystrophy type 2I (LGMD2I), which has weakened Noah’s muscles over time. With a stair lift installed, Noah can get up and down to his bedroom safely, avoiding many of the falls which first signaled the impending difficulties. The new house also has room for him to use his new power wheelchair, part of the proactive strategy of his parents, Meghan and Tom, to stay ahead of the progression of the disease.

When Noah was diagnosed with LGMD2I at five years old, his parents educated themselves rapidly on therapies and treatment options. The decision to start Noah on corticosteroids was not easy, but thus far has helped give him back a little of the umph, allowing him to continue doing things he loves like playing with his two dogs and going fishing with his father. Noah and his family look ahead with hope for better treatments to arrive in the future that can ultimately halt or reverse the disease’s progression. 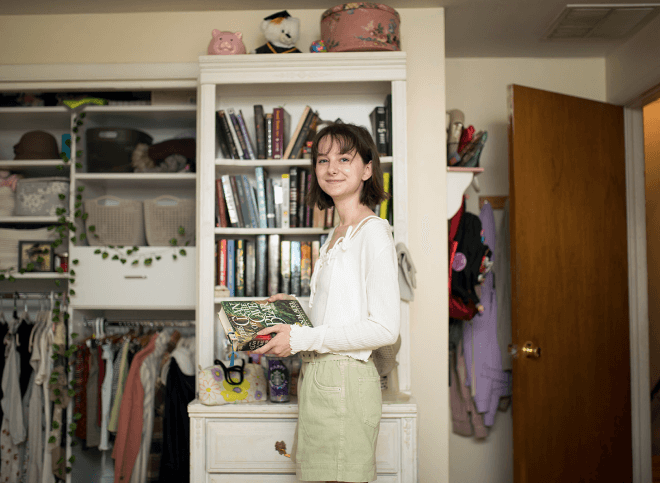 I want my struggle, my life, to be a conversation.

With astounding wit and exuberance Ayla is a young woman with a sharp mind who has gained untimely wisdom from her experiences with a rare genetic condition. She lives with limb-girdle dystrophy type 2I (LGMD21), a disease that has progressively impaired her physical abilities, but has only sharpened her mind. Diagnosed at 11 years old, the disease was once invisible to her peers, but slowly, and with self-compassion, Ayla learned to navigate the world as a young disabled woman.

With a keen sense of self, and an ever-expanding perspective, she has gained wisdom on how to negotiate the nuances and complexities surrounding her disease—both physiological and societal. Her relationship with her body as well as to those around her is anything but simple, and requires near-constant work. “People with disabilities are good problem-solvers,” she says. “We get used to navigating things each day.”

Whether finding solutions to daily mobility challenges or people’s attitudes toward disability, Ayla's ability to transcend difference, find common ground, and provide support to others is a gift to those around her, and a valuable tool for helping to mold a more vibrant and tolerant society.